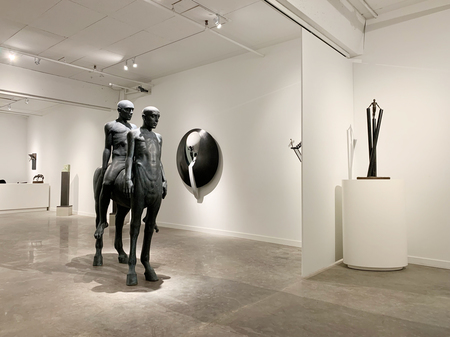 We are thrilled to be welcoming the public back for our 25th Eastside Culture Crawl. The Eastside Arts Society has done a tremendous amount of work to adapt to changing conditions and has planned a wonderful festival for November.

We will be open on both weekends: November 12th -14th is by appointment only with scheduling available here. November 18th - 21st is the usual Open House format. Please note - for smaller studios such as ours that cap visitors to 50 or fewer, vaccine passport-checking is discretionary, and Robinson Studios will not require passports. But be prepared to show your passport for the majority of participating studios including 1000 Parker Street.

Masking, distancing and self-screening for symptoms are mandatory in all studios.

A few notes about the Culture Crawl scheduler:

This system allows up to 10 visitors to book in any given timeslot. This means that if your party has fewer than 10 people, other visitors can book during your slot as well. If you'd prefer to have a private visit please contact us for details.

After 30 years at Parker Street Studios we moved to a new location in 2020, so the Crawl experience will be a little different this year. Our location at 1101 William Street has the studio and gallery under one roof. Visitors will be able to see the production space as well as the gallery, including several works-in-progress.

The main doors at William street bring you to the workshop space first. From there you can connect through to the gallery. Our space is also accessible from the Parker Street Studios parking lot (where the food trucks gather). Follow the signage down the south ramp and down the south hallway to enter via our gallery doors.

For wheelchair or other stair-free access please use the Parker street entry route.

We look forward to seeing you!

We are excited to announce the installation of Dead Reckoning at Trent University as part of their 50 year anniversary of rowing excellence! We are grateful for the tremendous support we received from Trent admin, alumni, staff and community as the project developed. 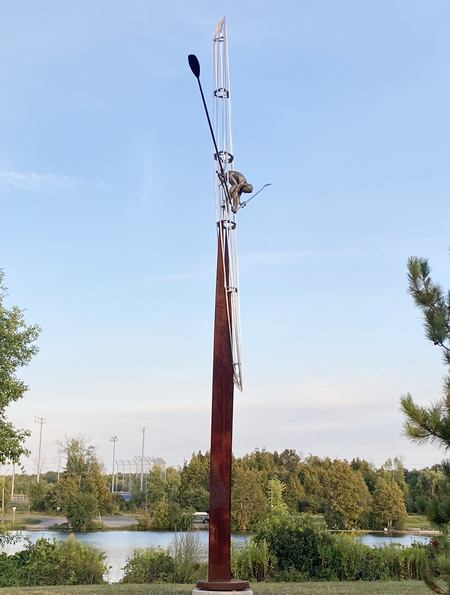 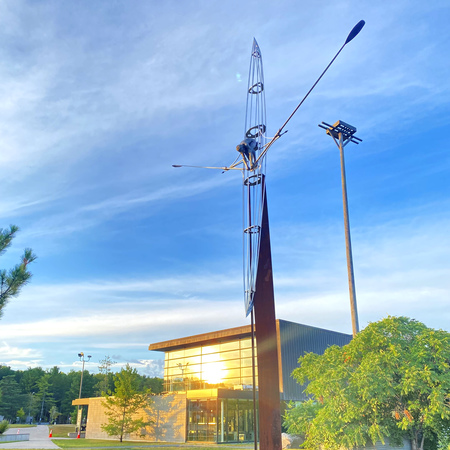 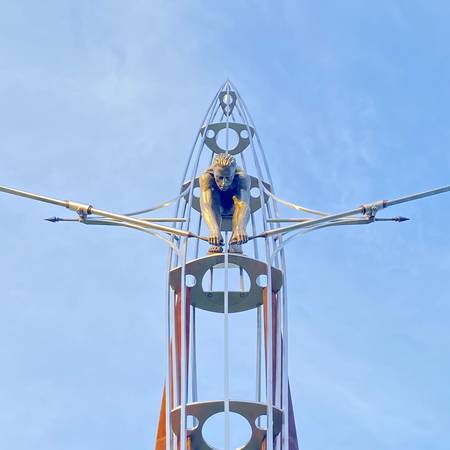 noun: 1) Navigation without the aid of celestial observations. 2) An estimate based on little or no information.

Inspired by aero/nautical forms and their attendant navigational purposes, this work articulates a striving human imperative: the thrust and pull of free will encountering the real.

The rower is an image of will; poised and replete with focus and energy, needing only the means to discern in what direction this deeply felt purpose may lie. 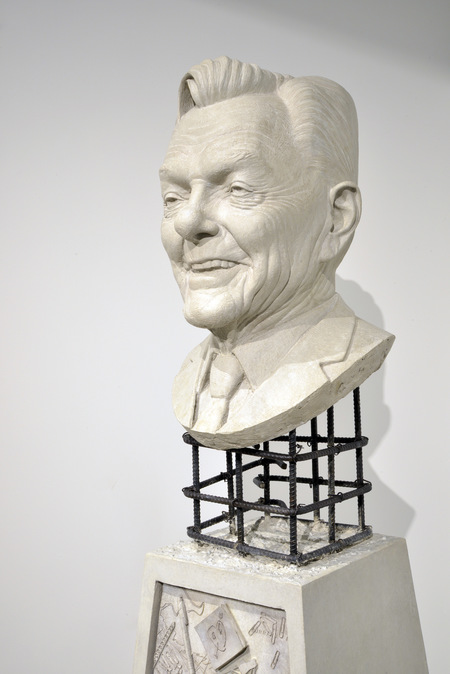 David recently had the privilege of creating a portrait in tribute to the great patron of 1000 Parker Street, Mr. Keith Beedie. Keith’s remarkable life is an inspiration to David, and Keith’s support for the arts community by the founding of Parker Street Studios has been instrumental in David’s career development. Ryan Beedie has continued that tradition of patronage and philanthropy, and all of us at the studio are grateful for the opportunity to have produced this piece for him. The portrait now has pride of place in the Founder’s Room at the Beedie offices. The story panel in the plinth draws on myriad elements of Keith’s life and legacy.⁠⁠ 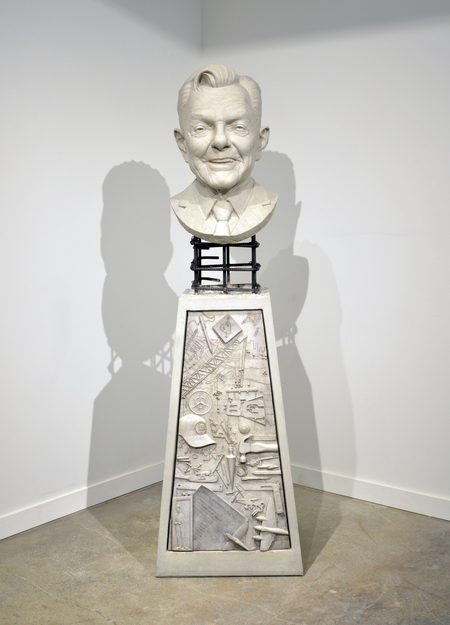 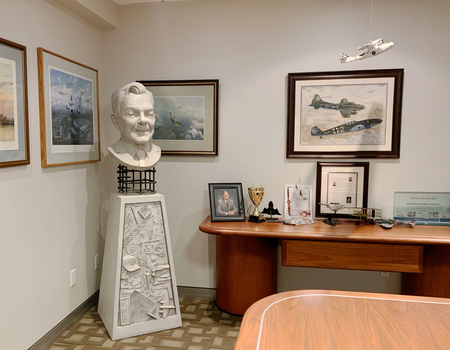 We are excited to announce that the documentary short A Windward Calm was featured in several film festivals this year, and was selected by the Whistler Film festival for their Canadian ShortWork Competition. The film focuses on David's kinetic suspended sculpture in the Gordon and Leslie Diamond Healthcare Centre at VGH.

Responses to the installation of the sculpture Windward Calm have been moving and humbling to David and his team. One beautiful - and poetic - reflection on the sculpture came to us from a Cardiac Function Clinic patient:

"I had to wait a while yesterday to see a cardiologist on the sixth floor of the Diamond Health Care Centre, and spent much of that hour marvelling at the quiet force, the grace, and the many intimations of immortality emanating from what I know now is your extraordinary sculpture, Windward Calm. The wintery light slanting toward sunset had somehow turned the atrium into a deep column of ocean water, amplifying the already extraordinary effect.

I actually glimpsed the piece within a few seconds of walking into the building, before I even knew it was yours or that the vessel contained a figure, just that a little keelboat was afloat high above me on the surface of an unknown sea. I had to sit down for a moment in the lobby cafe because the sight of that keel and hull so far up rattled and reminded me that I was myself at the bottom of an ocean in health terms. And I kept thinking about that little dinghy as the elevator rose up toward it. Arriving on the sixth floor, de profundis, came with a flooding sense of relief, of breaking the surface, full of renewed hope, and oxygen, and resolve.

Then when I realized there was a figure at the helm, and that it was your figure, your sculpture, I was struck by the further significance of it all, the idea of the forces that propel us, the winds, the destinies that we try so intently to channel to our benefit. So beautiful, the metaphor of a breeze and the boat that transmutes it, at this very juncture of our arriving, in need, at a centre of medical science, arriving with all our fear and our bravery and our vulnerability, a breeze that will carry us onward, whatever the science may show us, however long our allotted passage may be." 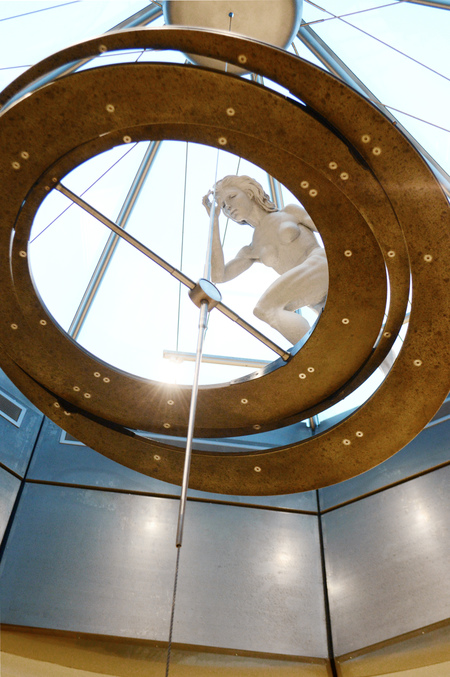 We are pleased to present Aequilibria, David's newest suspended artwork.

"The allegorical figure of Lady Justice presides over the facades, and loiters in the lobby of every Courthouse in the western world. That archaic image - blindfold, figure, sword and scales - is here re-formed within the currents of our fast-flowing cultural moment.

Staggering technological and teleological flux has us grappling for viable footing as never before - and perhaps nowhere more than within the juridical sphere is a culture’s feet so bound to its foundations.

So, rendered here is no longer some lesser deity holding up simple binary judgement, but humanity itself in the shifting scales... Grappling over the post-Nietzschean void...  Astride tilting and contingent ground. In elliptical orbit amid the planetary pull of passing epistemologies. Striving for poise within the requisite un-balance of any and all progress...

And even so, this figure inclines toward the ancient human citing of a true and plumb line - some existential axis along which we may divine and provision a right and just orientation toward the nature of being.” ~DR, 2019

Thanks to Brenda Bradshaw for helping make this piece a reality. 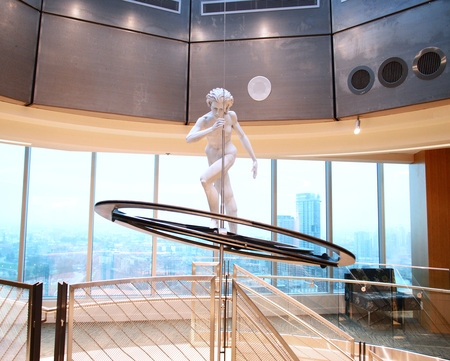 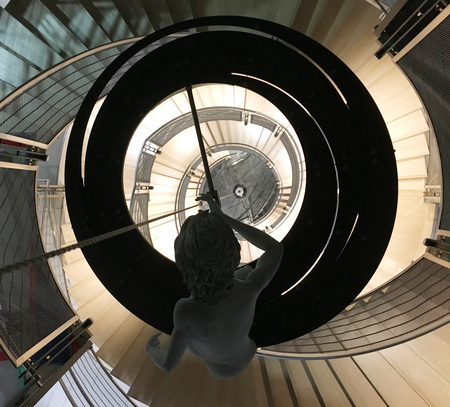