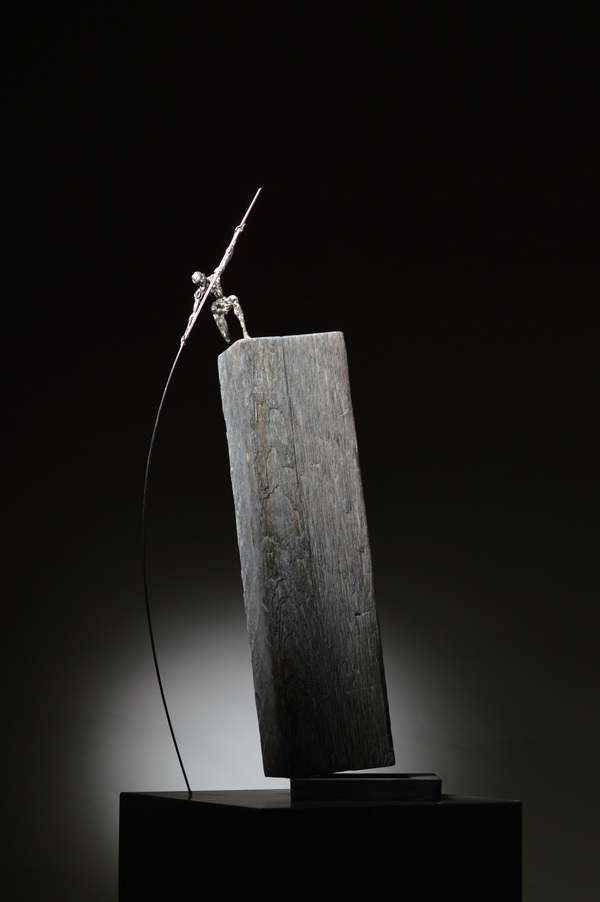 Like Lori Anderson's musical treatise in which the act of walking is expressed as a constant falling forward, the artist is generally best kept off-balance. In practice, this stumbling-forward momentum is sometimes done by allowing the hand, eye, and mind to wander in the dubious company of obtuse and uncooperative materials and processes; rough terrain over which any previously held virtuosic skill cannot be carried. These bronze and silver objects are made of, or rather from, foam coffee cups, stir sticks, Post-It Notes, plastic cutlery, toothpicks, old sand-casting patterns. A workbench cluttered with such things can, and probably should, be read like an analog mind-map of the artist in question. As much as it injures my authorial pride, I try no longer to shield myself from the question: What is the primary defect of a mind for which these objects are the primary output… In the end, however, I cannot but resign myself to the burden and privilege of the thing —When God* gives you visions, make visual-aids.

At any rate, it seems I’ve come to the place where, on some days at least, I can no longer distinguish myself from my studio, theory from practice, and in which the ten thousand collected artifacts on my studio shelves preside like jars of preserves: ideas of which the wax-seals have yet to be broken.

*(or his agents, assigns, or representatives – whether declared either by omnipresence or absence)
Loading...